February 19, 2009
It's the one word I can never say
It does not yet exist
The pounds my tongue seems to weigh
When I try to describe this
Could knock me to the floor
So hard I'd leave it cracked
But all the pain I would adore
No injury even has an impact
Now that I have you.
My lips can barely conjure a quiver
So no one has a clue
For I have no phrases to deliver
So I attempt using love as its label
But my heart leaps in protest
A brief pause to make myself stable
I still have nothing to suggest.
And so I allow myself to succumb
I just let myself yield
To words that may never come
But could not be more real.
Post a Comment
Click to Continue Reading!»

February 19, 2009
your pictures loom over me
can't fight their gaze
always-- when my eyes are open or closed
it's just like the worst type of maze
I'm trapped by your face but it's trapped by a frame.
Our feelings hit the frame and froze
stranded, soaked up in the storm
love remains at least in photo form.
Post a Comment
Click to Continue Reading!»

January 11, 2007
nothing beats gripping a pen in hand and scribbling on the page
nothing beats finally sharing it with the world
nothing beats having people listen
because they want to
not because somebody forced them.
nothing beats adding punctuation
only when
you feel like it
nothing beats deciding when to start a new line
for your own reasons
that nobody else knows.
nothing beats watching them try
to figure it out
to figure you out.
nothing beats always having someone to listen
and not needing a response
nothing beats metaphors
that mean something different
to everyone who reads them
nothing beats jumbling it all together
so they can tear it all apart
without breaking it
Post a Comment
Click to Continue Reading!»

Life from the Top 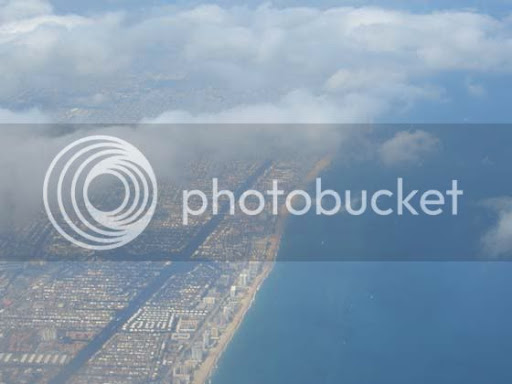 I think people view the lives of others in aerial view. I think that this happens often times with problems. I might have a problem that seems to have me imprisoned. I might feel as if I'm lying on the ground, completely immobile, held in place solely by this problem. I might feel as if I have no escape route, and all I can do is lie in place until a solution makes its way into my crowded mind.
I might share this problem with another person in order to get some ideas. However, I realize that the two of us would be located in two different areas. I'd sit somewhere on the ground, next to a huge body of water, representing my problem. This problem could easily drown me and I wouldn't even have the ability of swimming to my safety. The person I'd share my problem with would be sitting on an airplane looking out the window. My body of water would look like a blue dot, if the person could even tell that it was colored blue. I've heard the reference of "looking out t…
Post a Comment
Click to Continue Reading!»

January 08, 2007
New territory that I'm frightened to explore
I think I'll pace around the borders
before I pry open the door.
New territory & I think I'm almost ready
Spent the past half hour shaking;
now I'm trying to get steady.
With the precision of a gymnast on a beam,
I take cautious steps & then I swallow my scream.
& I know that I can't go through life with both of my eyes closed
My pupils aren't film; they won't falter when exposed.
So I smudge my fingerprints all over the clean slate
So if I attempt to turn back, it will be too late.
Teeth perched sharply on my lip
I'm still not allowing a scream to slip.
Time to stop dwelling on what is behind me
'Cause I've left evidence for the future to find me.
After the past gasps for its final breath
I throw dirt on the casket & the past gives in to death.
Post a Comment
Click to Continue Reading!»

This is your Brain on Drugs (short story)

January 04, 2007
Lisa walked through her doromitory hallway, inadvertently overhearing Derek and John's dialogue through a door that she instantly wanted to break down and bulldoze out of existence.
"I already feel a buzz," she heard one of them declare, "and it's barely even been a minute."
Lisa lifted her hand, preparing to knock, but her hand remained poised in front of the door as she heard the echo of the other boy's response.
"That's not a buzz. That's called breathing. This stuff makes breathing feel better. It makes everything feel better."
Aghast, Lisa stood silently and still.
For the first time, she didn't want them to hear her, though they never seemed to hear her when she wanted them to.
Suddenly the boys' worn out dormitory door seemed symbolic. How could such a barrier build up between people who used to actually enjoy each other's company?
Emersed in trepdiation, Lisa felt herself begin to break down. She considered turning up the…
Post a Comment
Click to Continue Reading!»

January 04, 2007
I'm hearing about it everywhere and reading about it everywhere. I'm getting tired of hearing about employers checking out people's facebooks and even "googling" prospective employees for the purpose of obtaining background information. What ever happened to simply looking at a person's GPA and resume and judging on factors that actually apply in a workplace setting? Why don't I think it matters if someone partied during college? Well, what exactly do these people think will happen if heaven forbid, they hire a person that frequented parties during their college career while still managing to maintain a stellar GPA? Perhaps they expect a scenario like this:

A company hires Jack, a Penn State graduate who majored in accounting, as their financial controller. Jack graduated with a 3.7 GPA, studied diligently throughout his 4 years at college and also attended parties every weekend. The company saw Jack's partying pictures on facebook but decided to disre…
Post a Comment
Click to Continue Reading!»
More posts